Every four years, international champions gather to participate in the ultimate test of athleticism and precision known to mankind—the Olympic and Paralympic Games. Like the Olympic Games, the Paralympic Games showcase the tenacity and dedication of the world’s elite Paralympic athletes. Even though these athletes endure physical impairments, they push forward to become great in their sports despite the obstacles they face.

Sonja Tobiassen is no exception. She will be competing in the 2016 Paralympic Games in Rio on September 10 and 13 representing Norway in air rifle shooting.

Working as a nurse in Norway, Sonja noticed her muscles beginning to weaken in her mid-20s. At the young age of 25, she was diagnosed with muscular dystrophy, an incurable disease that interferes with the production of proteins needed to form healthy muscle. Now, 20 years later, Sonja is in a wheelchair and living every day with love and gratitude. 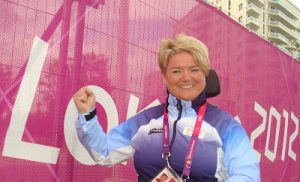 “The little things really mean something to me,” Sonja said. “Things like friends and family and stopping to enjoy the flowers. I live a good life, an independent life, with my daughter who is 17. I’m grateful every day for a house and a car and a sport that I love.”

While in a rehabilitation center in 2010, Sonja participated in an air rifle shooting activity. One man in the room was floored by her natural aim and consistency. Curious to see if Sonja was just having a lucky day, he took her to a shooting simulator where she again proved her natural talent. Soon enough, the Norges Skytterforbund (Norwegian Shooting Association) learned of her gift and, to Sonja’s surprise, a couple years later she found herself competing in London’s 2012 Paralympics.

To prepare for her second Paralympic Games, Sonja is putting a great deal of focus into achieving her goals. Essential to her training and everyday life is being able to take special care of her health.

Like shooting, Sonja found her passion for Synergy by coincidence when Synergy products were first being introduced in Norway. Open to try any quality products that could aid in her energy levels, Sonja gave Synergy products a chance. She began taking Phytolife and Mistify, then incorporated ProArgi-9+ and e9. More recently, she has added Body Prime to her nutritional regimen. Over the years, Sonja has realized just how influential Synergy products are in her daily pursuit to maintain optimal health.

Within the next few months, Sonja will attend three training camps throughout Europe to prepare for Rio. Training has been an emotional roller coaster for Sonja leading up to this year’s Paralympics. When her muscles don’t cooperate, her performance suffers and it’s easy to become discouraged, but she does not give up.

“Our limits are in our heads,” Sonja said. “If you really want something and you work for it, it’s possible. When I got sick, I stopped working. I lost friends. I fell out of everything. Now, I travel around the word. I meet amazing people through my sport. I have a widespread family through shooting that is inclusive and caring. Shooting makes me get up in the morning.”