‘Feeling Lucky’ with Nobel-winning science
With only a week left to take advantage of the Feeling Lucky product promotion, we want to tell you just how lucky Synergy WordWide is to have products formulated with ingredients backed by Nobel-prize winning science. 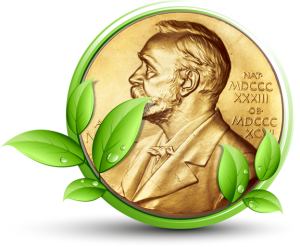 Both products in this month’s special—Liquid Chlorophyll and Core Greens—contain the health-promoting ingredient chlorophyll, a green superfood.

Chlorophyll was first isolated in 1817 and in 1883 was noted to be involved in photosynthesis. In 1815, a German chemist named Richard Willstätter won a Nobel Prize for his chlorophyll discoveries. He found that the structure of chlorophyll and hemoglobin, the red pigment found in human blood, were strikingly similar, and even dubbed these compounds “life’s most vital pigments”. Both molecules share a similar structure made up of carbon, oxygen and nitrogen while chlorophyll contains a single atom of magnesium and hemoglobin contains a single atom of iron.

Willstätter also determined that chlorophyll’s bond is so strong that the magnesium cannot be liberated from the molecule, even by the action of a strong alkali—a soluble salt substance. He then found a process that allowed him to prepare pure chlorophyll in large quantities.

In case you thought ProArgi-9+ was the only Synergy product containing an ingredient that has received the highest scientific praise, now you know. Synergy WorldWide is privileged to have a brilliant research and development team with knowledge of the most potent and effective ingredients that can contribute to maximum health. 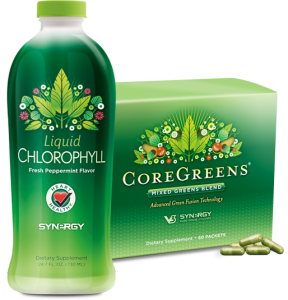 Thanks to Willstätter and Synergy’s R&D scientists, we reap chlorophyll’s health benefits by simply mixing Liquid Chlorophyll with water or taking a Core Greens capsule once per day.

The Feeling Lucky promotion ends March 31. Experience the benefits of Liquid Chlorophyll and Core Greens at a discounted price today.